Brother XII’s politics could be summed up in a single word—conspiracy. He repeatedly warned about the power of monopolies, predecessors of today’s transnational corporations, claiming they would soon control every aspect of human life. He accused the media of keeping the masses ignorant about the true state of affairs that prevailed in the world, alleging that a clandestine power controlled everything from the price of bread to the policies of nations: “Sleeping or waking, you are the chained victims of this fearful thing—Invisible Control. No president is ever elected or King crowned, no treaty ever signed or army moved, unless it be at the bidding, or at least with the knowledge and consent, of this unseen power which controls prince and president and peasant alike.” 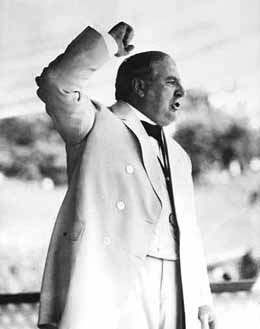 Senator Heflin speaks at a Ku Klux Klan rally in New York State, June 18, 1928.
Determined to achieve political power, Brother XII attempted to establish a Third Party in the United States. In January, 1928, he met with members of the U.S. Senate and House of Representatives in Washington, D.C., forging an alliance with Alabama Senator James Thomas Heflin, a vociferous critic of the Hoover administration. He also conferred with the Ku Klux Klan, which vigorously opposed the presidential candidacy of New York Governor Alfred E. Smith, a Roman Catholic who was thought to be a willing tool of the Vatican. Brother XII claimed that voters didn’t have a real choice:“Elect Hoover and you will be plundered in a thousand ways. Elect Smith and freedom will become a memory in the land.”
Brother XII worked tirelessly to make his Third Party a potent political force. He planned to achieve the biggest electoral upset in American history. On July 5, 1928, he confidently declared: “I expect to select and will select the man who will be the next president of the United States.”