Brother XII’s personal charisma and persuasive prose drew many wealthy and socially prominent individuals to his cause, including a Chicago lumber baron, a novelist and writer for The Saturday Evening Post, a publisher in Akron, Ohio, and several famous astrologers. One of his most devoted adherents was a wealthy socialite from Asheville, North Carolina, named Mary Wortham Thomas Connally, whose ancestors had arrived on the Mayflower and had sat in the House of Burgesses, the first governing body in America. Mary was so impressed by Brother XII that after only a three hour meeting in a Toronto hotel, she wrote a cheque to him for $23,000, an enormous sum in 1928.

Another devoted disciple was Roger Painter, the so-called “Poultry King of Florida,” who regularly sent Brother XII cheques for five and ten thousand dollars. Summoned to the colony in 1929, he arrived with $90,000 in cash that he promptly turned over to his guru, a sum worth over a million dollars in today’s currency. Brother XII claimed to have known Painter in a past life when the saturnine former stage hypnotist and inveterate womanizer was allegedly Jean de Valette, the first Grand Master of the Knights of Malta. But the dissolute chicken magnate would ultimately come to regret squandering his fortune on Brother XII, bitterly declaring, “Today, I don’t have a nickel—he got it all.” 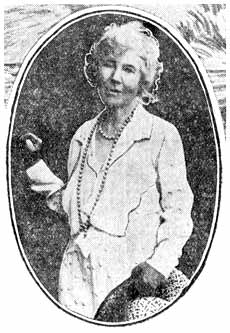 Mary Connally photographed wearing the same dress she wore when she first met Brother XII in the King Edward Hotel in Toronto in August, 1928.