Brother XII’s spiritual manifesto, A Message from the Masters of the Wisdom, explained that the Work was one of preparation for the founding of a more advanced race of humanity, since the present race was doomed: “The thoughts and inventions of men will be placed at the service of demons and will be used for the wholesale destruction of humanity. Those who perish will be more fortunate than those who remain.” The new race would evolve in Centers of Safety in California, Mexico and Southern British Columbia, its members building the Aquarian civilization that would rise upon the ashes of the impending conflagration. 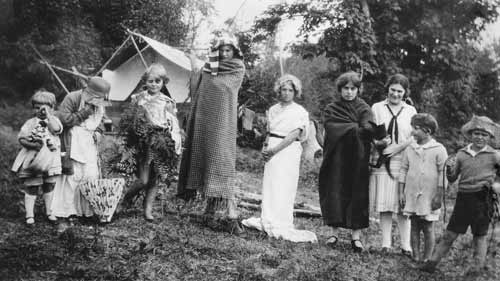 On 126 acres of idyllic seaside property at Cedar-by-the-Sea on Vancouver Island, Foundation members built sturdy homes and prepared to survive the coming Armageddon in their self-sufficient spiritual community. The first annual General Meeting of the Foundation was held on July 25, 1927, Brother XII’s 49th birthday. The occasion marked a significant milestone; in just six months the Aquarian Foundation had become the fastest growing spiritual group in North America.

Brother XII placed particular emphasis on the importance of the children to the Work, stressing that they must be protected from the pernicious influences of the outside world so that their spiritual natures could naturally unfold; it was the children and grandchildren of these children, he predicted, who would become the leaders and teachers in the great spiritual renaissance that would usher in the Millennium.