In metaphysical terms, gold symbolizes spiritual wisdom. Brother XII used gold as a metaphor, telling his disciples, “Only the gold of pure and unselfish devotion will pass the test.” The first requirement for admittance to his colony was “THE SURRENDER OF PERSONAL POSSESSIONS, an actual not a theoretical surrender.” The guru insisted that those seeking to join his group convert their assets into gold, for he believed that only gold would retain its value when the stock market crashed and the banks failed. 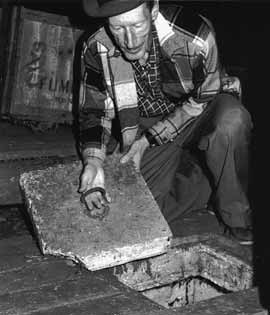 Brother XII and Madame Z devised an ingenious way to store their booty. In an elaborate nocturnal ritual, the two filled quart mason jars with gold coins and sealed the contents with molten paraffin wax. Each mason jar was then slipped into a small cedar box with rope handles for easy portability. Brother XII’s treasure eventually amounted to 43 jars of gold coins, which he shuffled from island to island, hoping to outwit a possible thief. Many believe that he left this hoard buried somewhere in his island kingdom.

The lure of Brother XII’s gold has attracted treasure seekers over the years. They have dug throughout the islands, dismantled cabins, dived in the lagoon, and explored the caves of DeCourcy Island. To date, no one has announced the discovery of the treasure. One searcher ripped up a false floor in one of the colony’s buildings, convinced the gold lay beneath. He found only a loose roll of tar paper. Unfurling it, he read a message scrawled in chalk, an angry shout from the past: “For fools and traitors, nothing!”

Chemainus historian Harry Olsen lifts the concrete lid to the empty vault where Brother XII purportedly hid half a million dollars in gold and banknotes.