Brother XII and The Aquarian Foundation

The following photographs of the properties of the Aquarian Foundation as they look today were taken by James Santucci in the fall of 2000 during a trip to the Nanaimo area for the filming of a Brother XII documentary. The Valdes and DeCourcy Island sites remain essentially as they were in the late 1920s and early 1930s, but the property at Cedar-by-the-Sea, site of the original headquarters of the Aquarian Foundation, has been extensively redeveloped as a modern subdivision. The Gulf Islands of British Columbia are blessed with a Mediterranean climate, which appealed to Brother XII, as did the relative isolation and inaccessibility of the Islands. It was an ideal location for an alternative community such as he proposed. If the Aquarian Foundation ultimately failed to become the center of spiritual energy for North America and for the entire world as he predicted, it still retains its exquisite natural beauty to this day, though it now has an infamous history attached to it in the person and activities of Brother XII and the Aquarian Foundation. 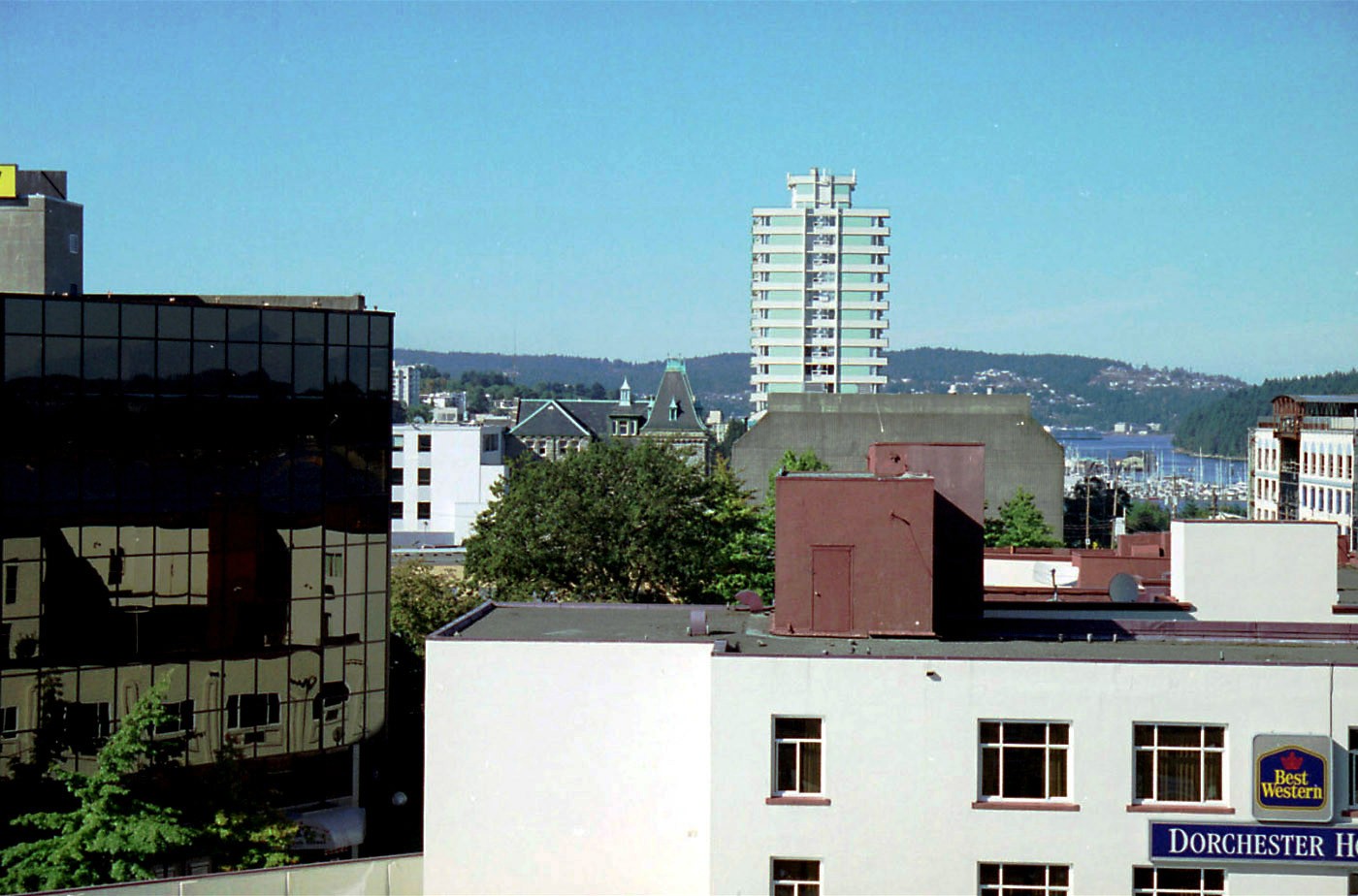 A small city with a population of 92,000, Nanaimo is a transportation hub for northern Vancouver Island. Brother XII is the area’s most notorious figure; his exploits are still discussed by old-timers in the district and memorabilia from the Foundation is on display in the Nanaimo museum.

A view of Nanaimo’s harbour with fishing boats at the pier. A coal mining center in Brother XII’s time, the shafts from the mines ran out beneath the ocean floor. The Aquarian Foundation members were greeted warmly by residents in 1927, as they added considerably to the local economy. 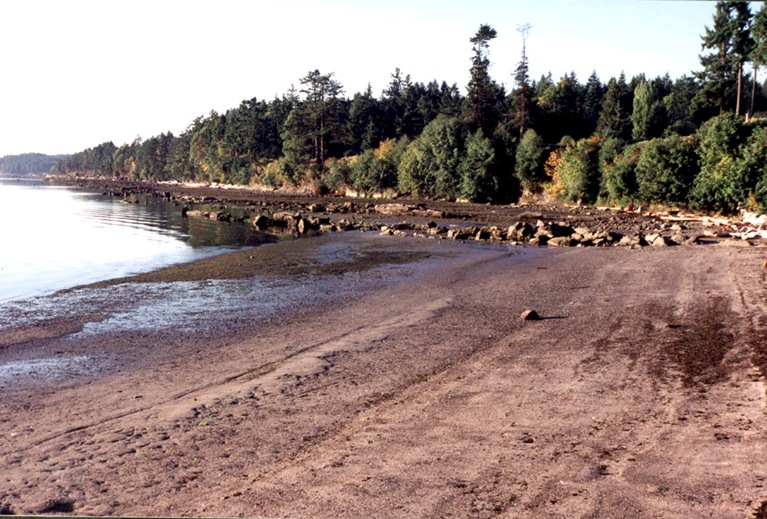 The beach at Cedar-by-the-Sea, nine miles south of Nanaimo, location of the first Aquarian Foundation settlement. The children of the society’s members played on the sand and dug for clams here during the idyllic first days of the colony. 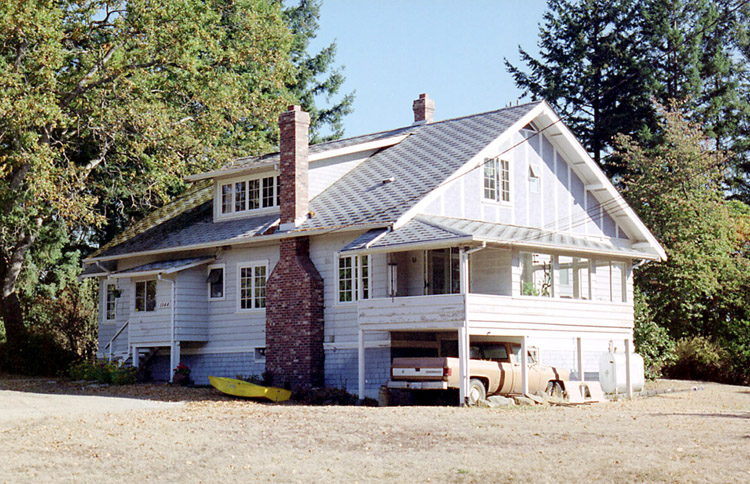 The Center Building was the administrative headquarters of the Aquarian Foundation. It contained Brother XII’s office, an assembly hall, and four upstairs bedrooms for visiting AF members. The chimney is a later addition. There is a large boulder out of frame to the left where disciples would congregate before going inside to attend Brother XII’s lectures. 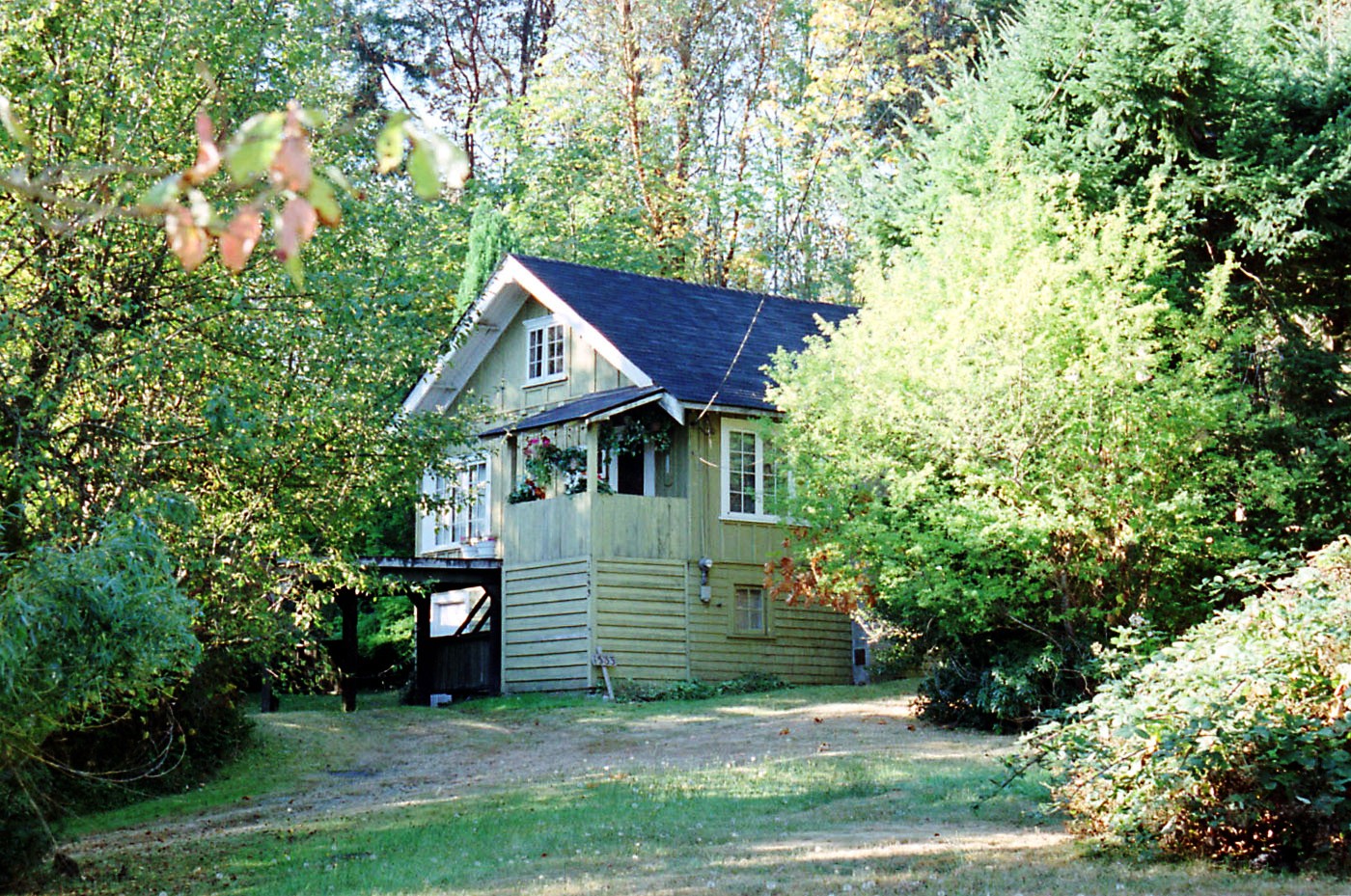 Brother XII’s house at Cedar-by-the-Sea, typical of the sturdy residences built by Foundation members. Brother XII lived here with his wife Elma, a Scottish woman he met in the South Seas who had nursed him back to health when he was ill. The two were never legally married, Wilson having never obtained a divorce from his first wife in New Zealand. 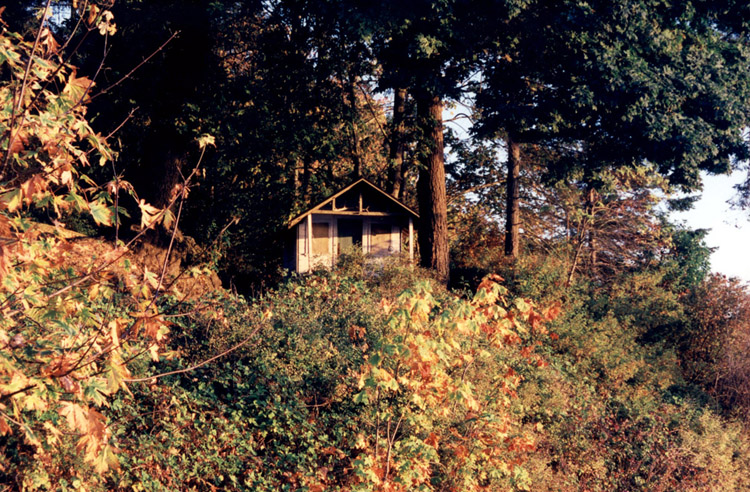 Brother XII’s House of Mystery was moved from its original location in the woods to the top of the cliff overlooking the beach at Cedar-by-the-Sea. It was the colony’s sanctum sanctorum, the place where Brother XII would meditate, claiming to receive instructions from the Masters of Wisdom who were allegedly directing his work. 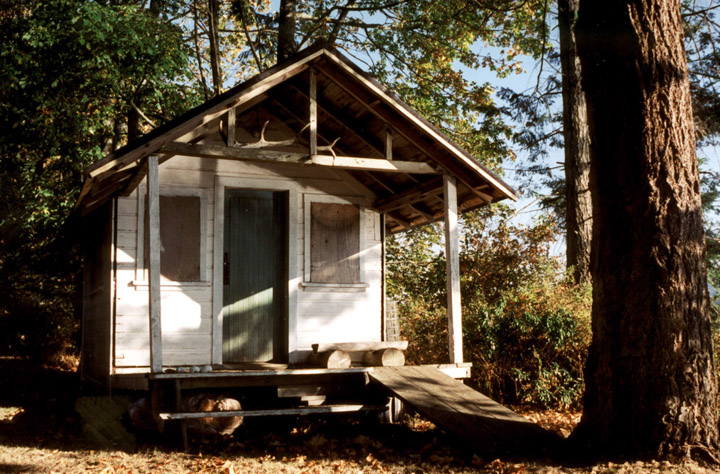 Close-up of the House of Mystery. Brother XII claimed to have passed the Fifth Initiation here, an event he celebrated in the poem, “Greeting,” published in Foundation Letters and Teachings. The name of the one-room dwelling has an astrological significance, for the Twelfth House is traditionally the House of Karma and the House of Mystery. The antlers are a recent addition. 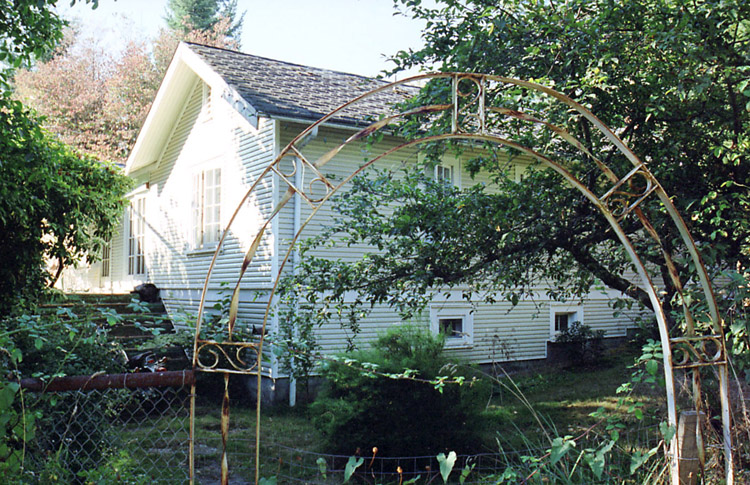 Former residence at Cedar-by-the-Sea of Maurice Von Platen, a Foundation Governor and one of Brother XII’s wealthiest supporters, though he would later be instrumental in the subsequent effort to depose him. The house is of excellent construction, with a stone fireplace, a spacious sundeck, and twin garages. It is essentially unchanged since its construction in 1928. 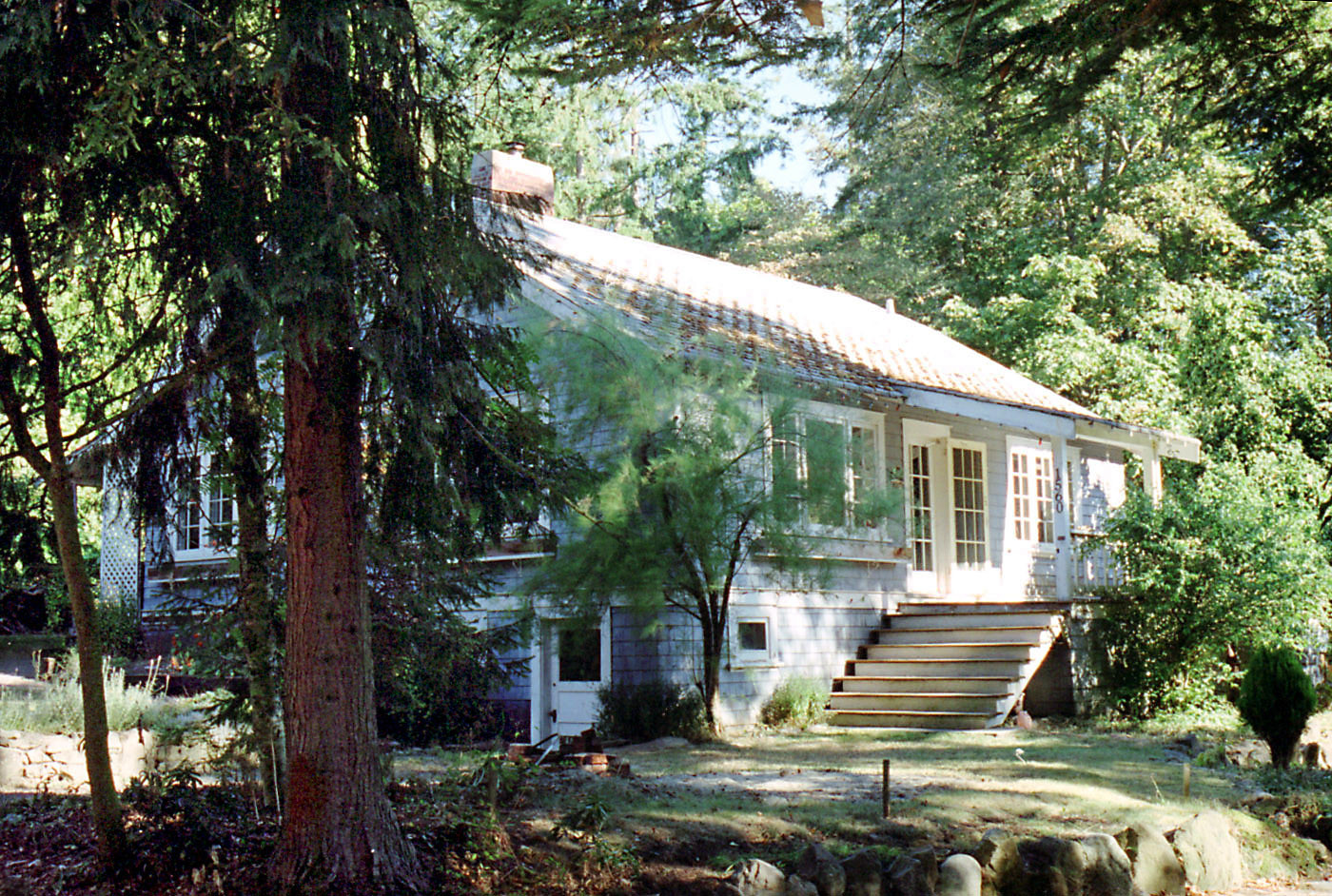 The Squier residence at Cedar-by-the-Sea was built by Maurice Von Platen as a home for his wife Alice Von Platen’s lifelong friend Ethel Squier and her daughter Lucita. The house contained a weaving studio, since the Squiers were accomplished weavers; it was intended that their work would provide a source of income for the colony. 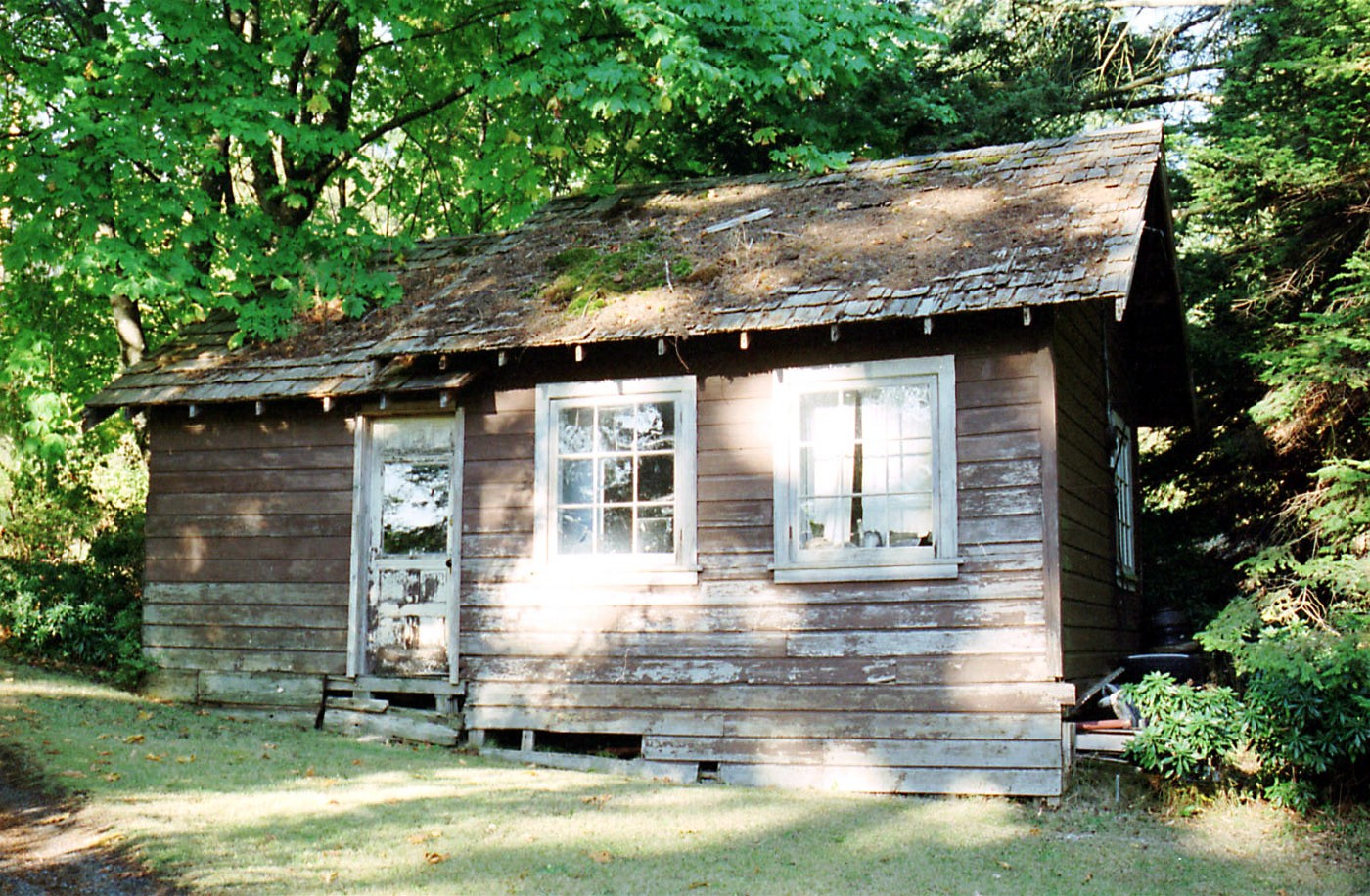 The cookhouse at Cedar-by-the-Sea where meals were prepared for the workmen who were constructing the AF settlement during the summer of 1927. Local tradesmen, along with members of the colony from California skilled in the building trades, built the houses and Center Building in a remarkably short period of time. The cookhouse has been moved from its original location and is now used as a tool shed. 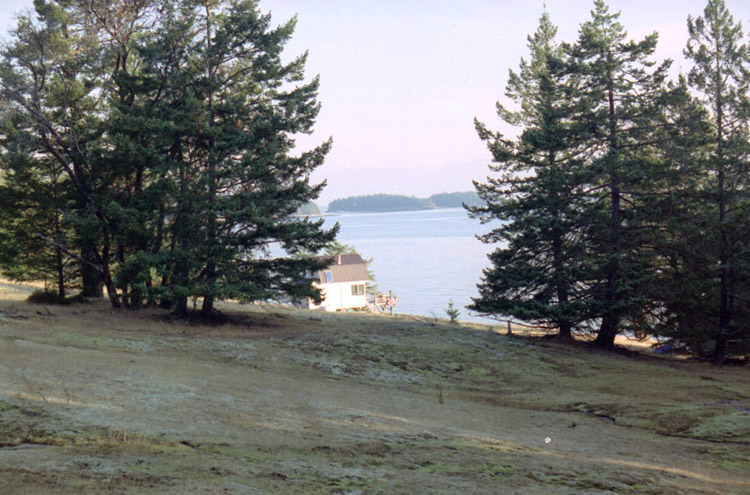 Valdes Island looking east towards the Strait of Georgia. The island is sparsely populated, though some summer cabins have been built along the shoreline, one of which is visible in the photograph, which was taken near the site of Brother XII’s cabin on the bluff. It was here that he conducted a secret love affair with the wife of a New York physician; the discovery of this infidelity caused dissension among AF members. 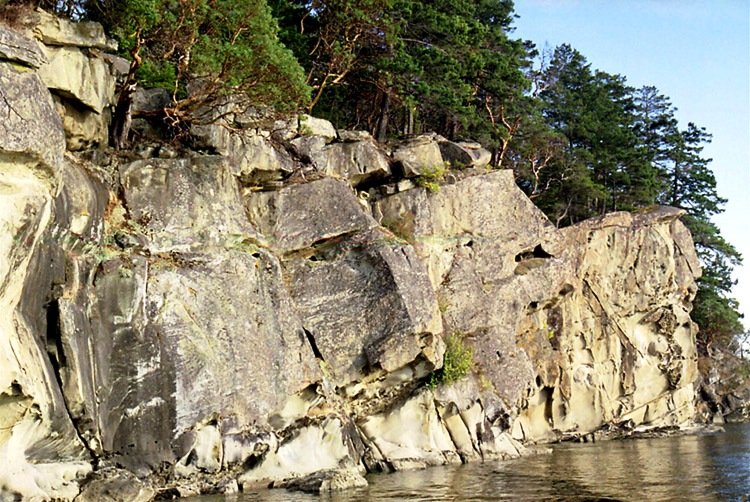 DeCourcy Island cliffs. The steep sandstone cliffs on the western side of DeCourcy Island have been eroded into strange shapes by the wind and water, giving the shoreline an eerie, haunted quality. The native inhabitants of the island once buried their dead in crevices that run deep into the rock. A cruise along this shoreline is a mesmerizing experience. 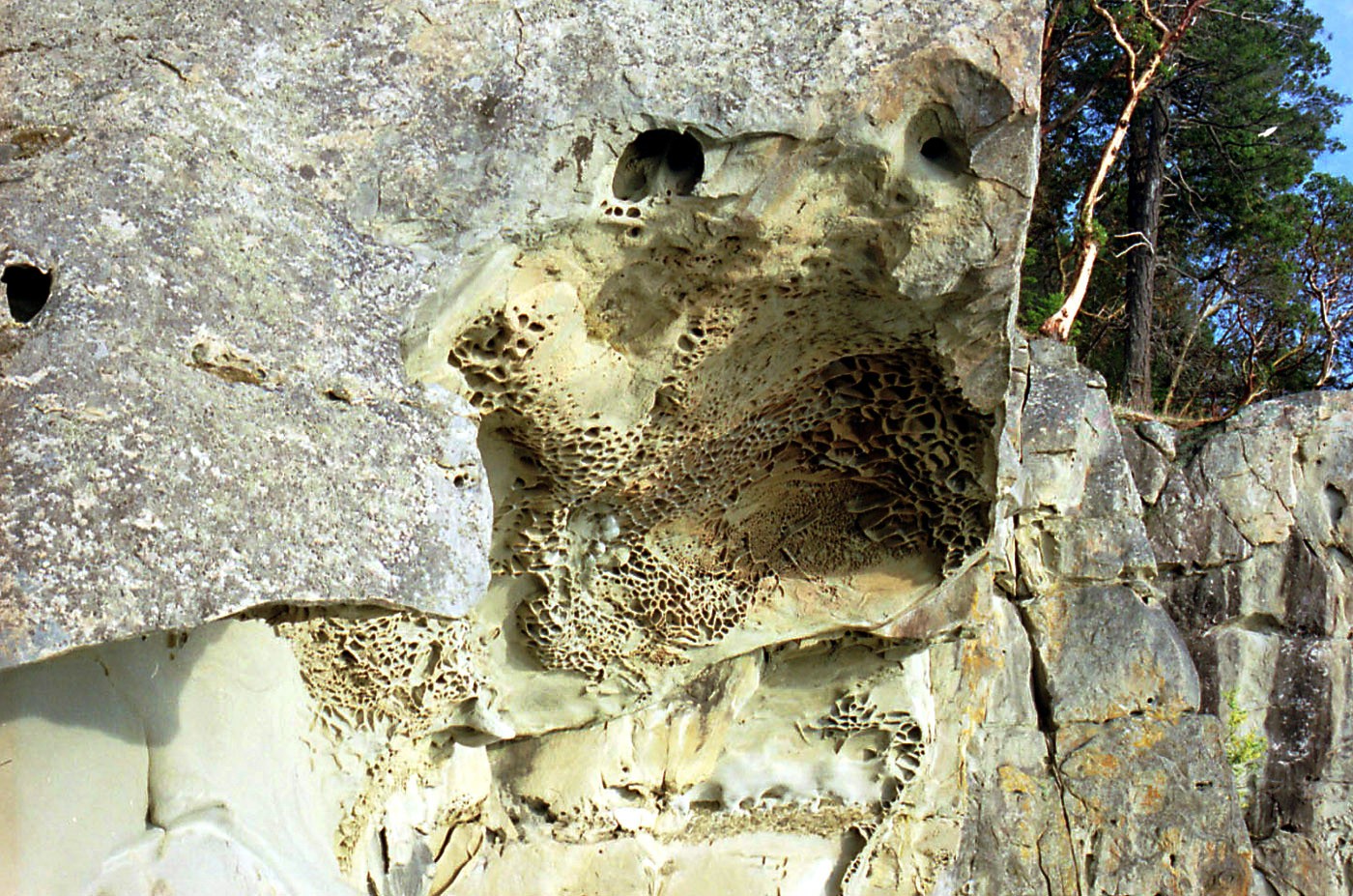 Detail of a DeCourcy Island cliff face showing unique erosion patterns. Twisted red arbutus at the top of these cliffs lend a supernatural quality to island scenes, especially at twilight. Brother XII reveled in the natural beauty of the island and claimed the energies of this area were highly conducive to his occult work. 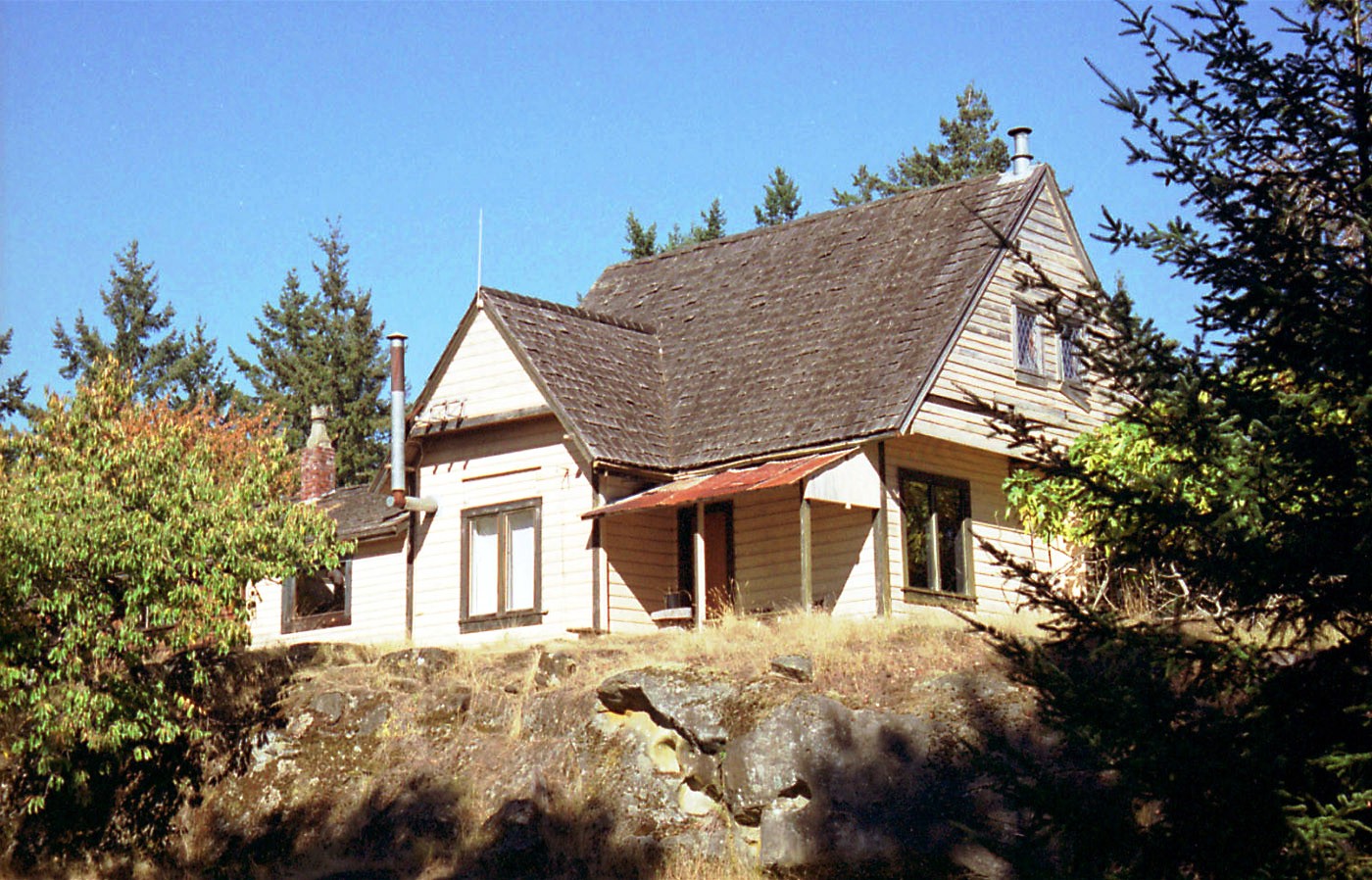 The farmhouse on DeCourcy Island is built at the edge of a cliff and looks out across Stuart Channel towards Cedar-by-the-Sea. Supplies were transported by boat from the Cedar settlement and carried up a road blasted out of the rock to the farmhouse and from there to the lagoon on the far side of DeCourcy Island. 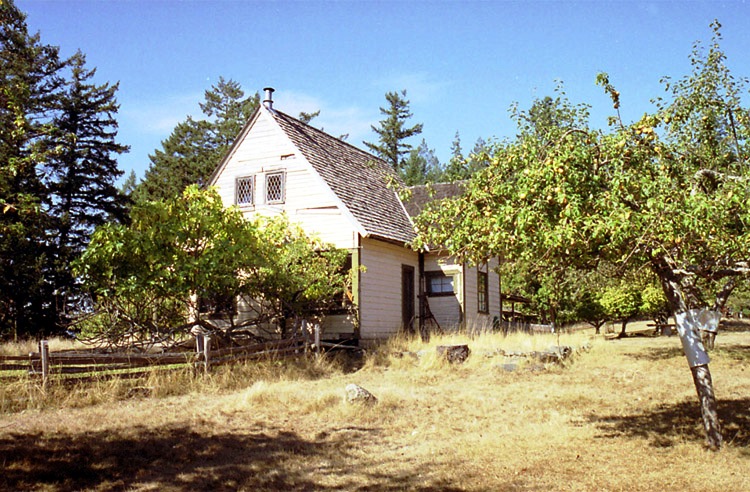 The farmhouse predates the Foundation and was already there when Brother XII purchased the Island in 1929 with funds provided by Mary Connally, his wealthy benefactor from Asheville, North Carolina. Mary lived here after the break-up of the Foundation when she was awarded the Island as part of her settlement. 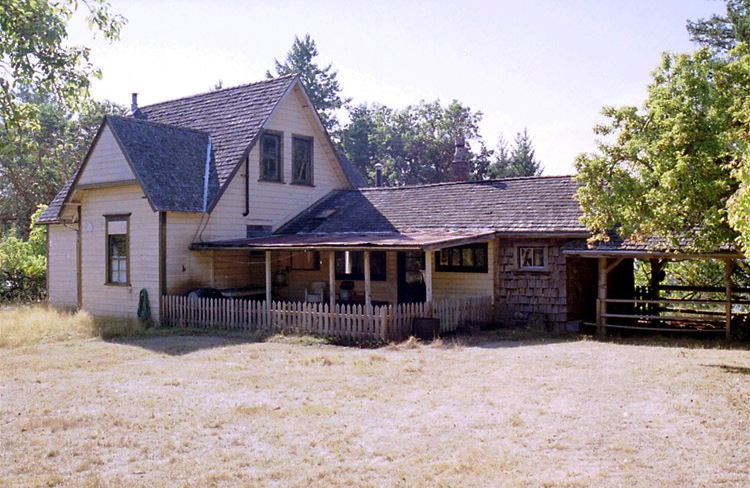 Another view of the farmhouse. It was recently demolished, suffering a similar fate to what may have occurred to the House of Mystery. It’s unfortunate these structures couldn’t have been preserved. In her old age, Mary Connally would hoist a white flag each morning to let her friends at Cedar-by-the-Sea know she was alright. She died in an Asheville nursing home in 1947. 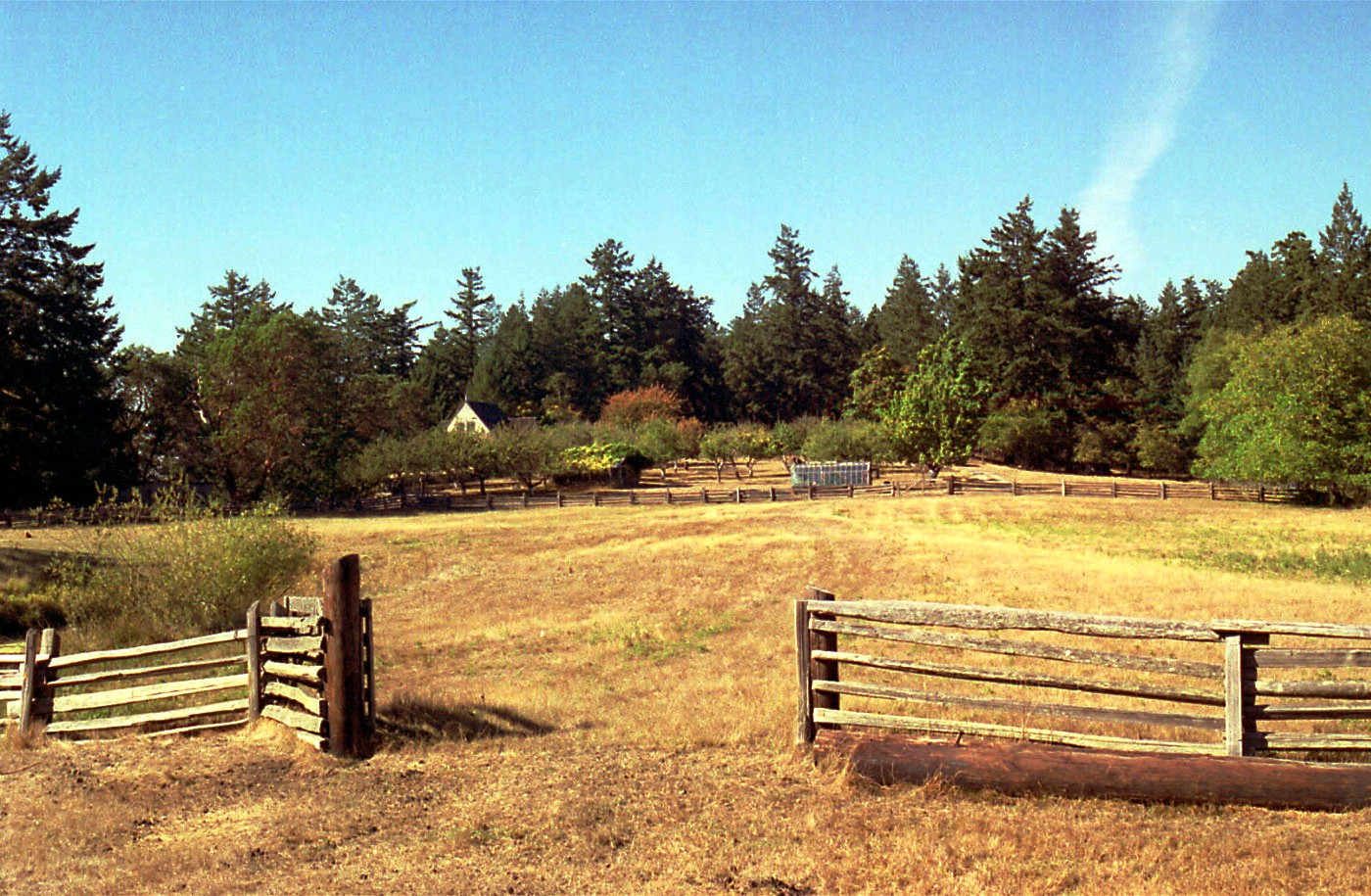 A view of an open field at the DeCourcy Island farm with the farmhouse in the distance to the left and a chemtrail in the sky to the right. The colonists worked hard at rehabilitating the original farm on the island, so that the colony could become self-sufficient. Their efforts may not be readily apparent today, but fields like this are the result of their dedicated labor. 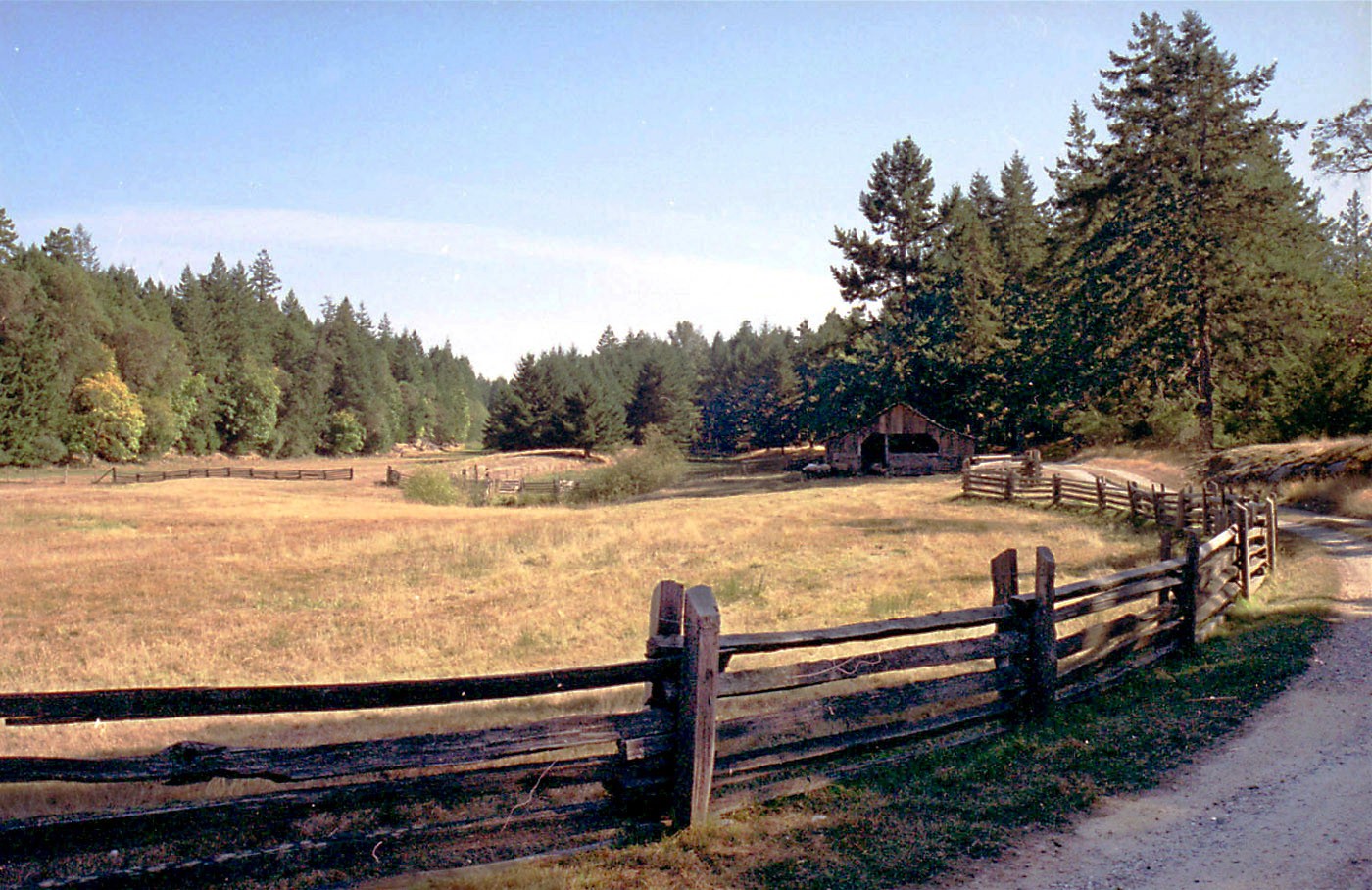 Another view of the same field. The colonists would often sing as they worked and long hours were typical, even before Brother XII implemented slave-like working conditions. The colony’s three locations, Cedar-by-the-Sea, Valdes Island, and DeCourcy Island, each with their respective duties, represented three distinct grades of discipleship. 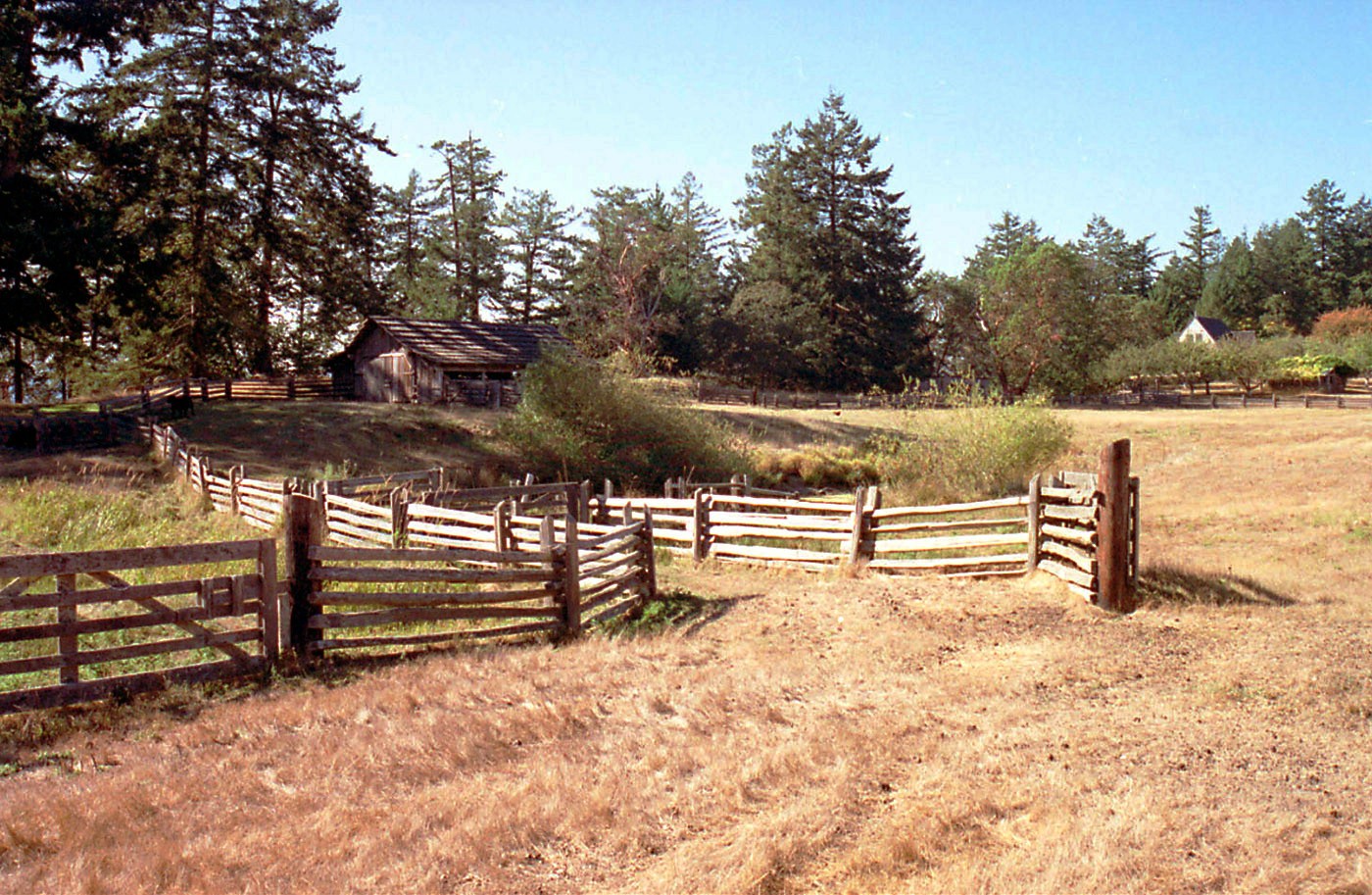 This idyllic scene of a field with fences belies some of the cruel practices that took place at the colony, with the disciples working as much as twenty-hours a day, while subsisting on slave rations and being lashed by Brother XII’s volatile mistress, Madame Z. The unrelenting toil and abuse broke the spirit of the colonists and led to their revolt against Brother XII. 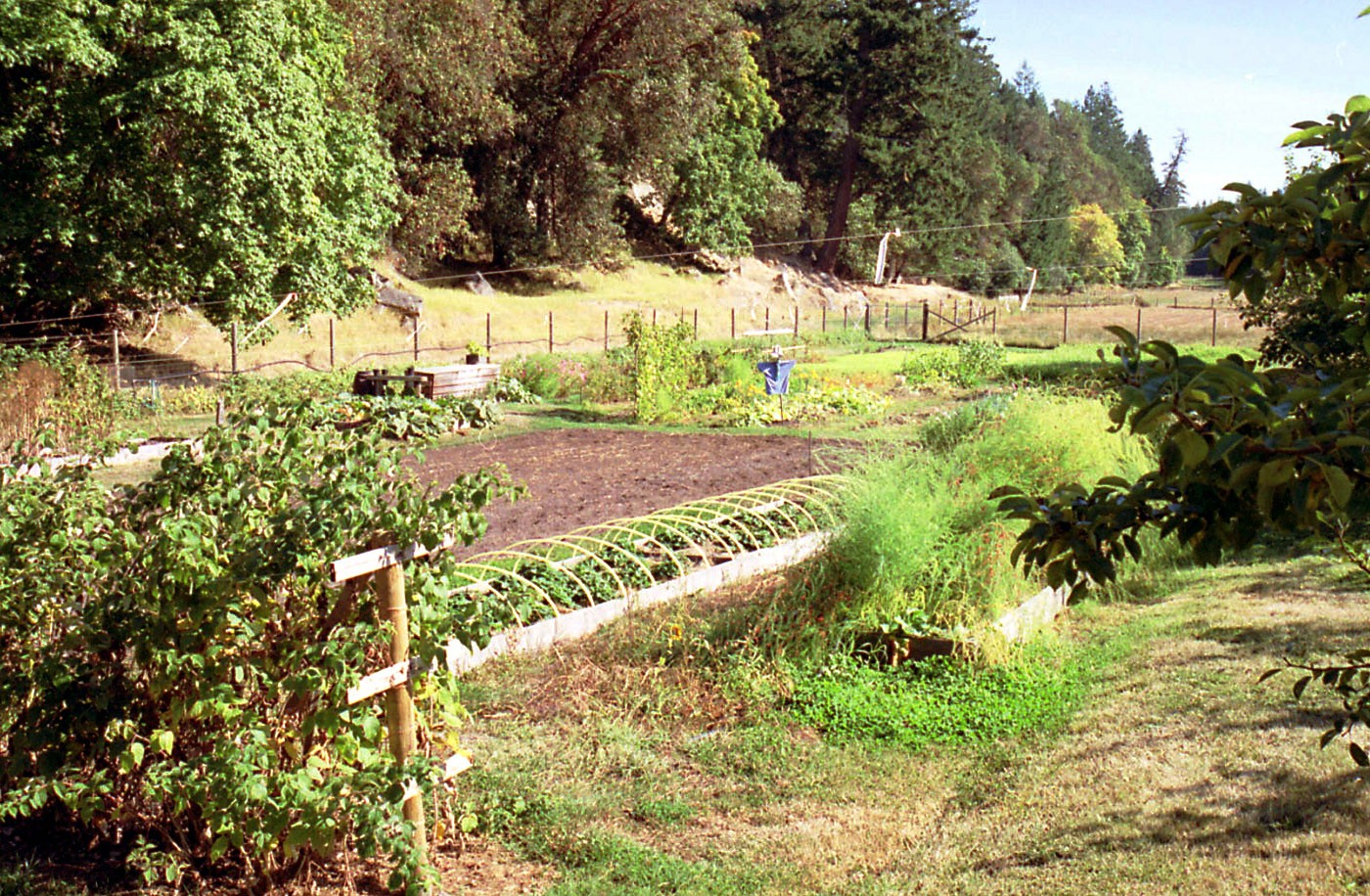 A vegetable garden at the DeCourcy farm. Brother XII was determined to make the settlement self-sufficient, a goal which he achieved. He referred to his Island kingdom as a “City of Refuge,” exhorting the disciples, “Labour in this Vineyard, and thou shalt eat of its fruit. Build thou the City of Refuge; it shall hide thee in the Day of Adversity.” 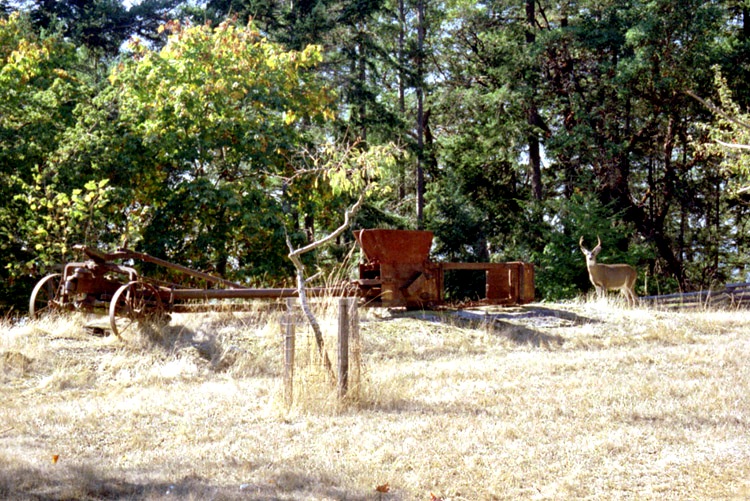 Abandoned reaping machine with deer at the right. The colonists were the equivalent of today’s survivalists, stockpiling supplies so they could survive the coming economic crash that Brother XII predicted. When the Brothers’ Center, as it was later called, broke up, Brother XII vandalized the premises and fled to England with Madame Z. 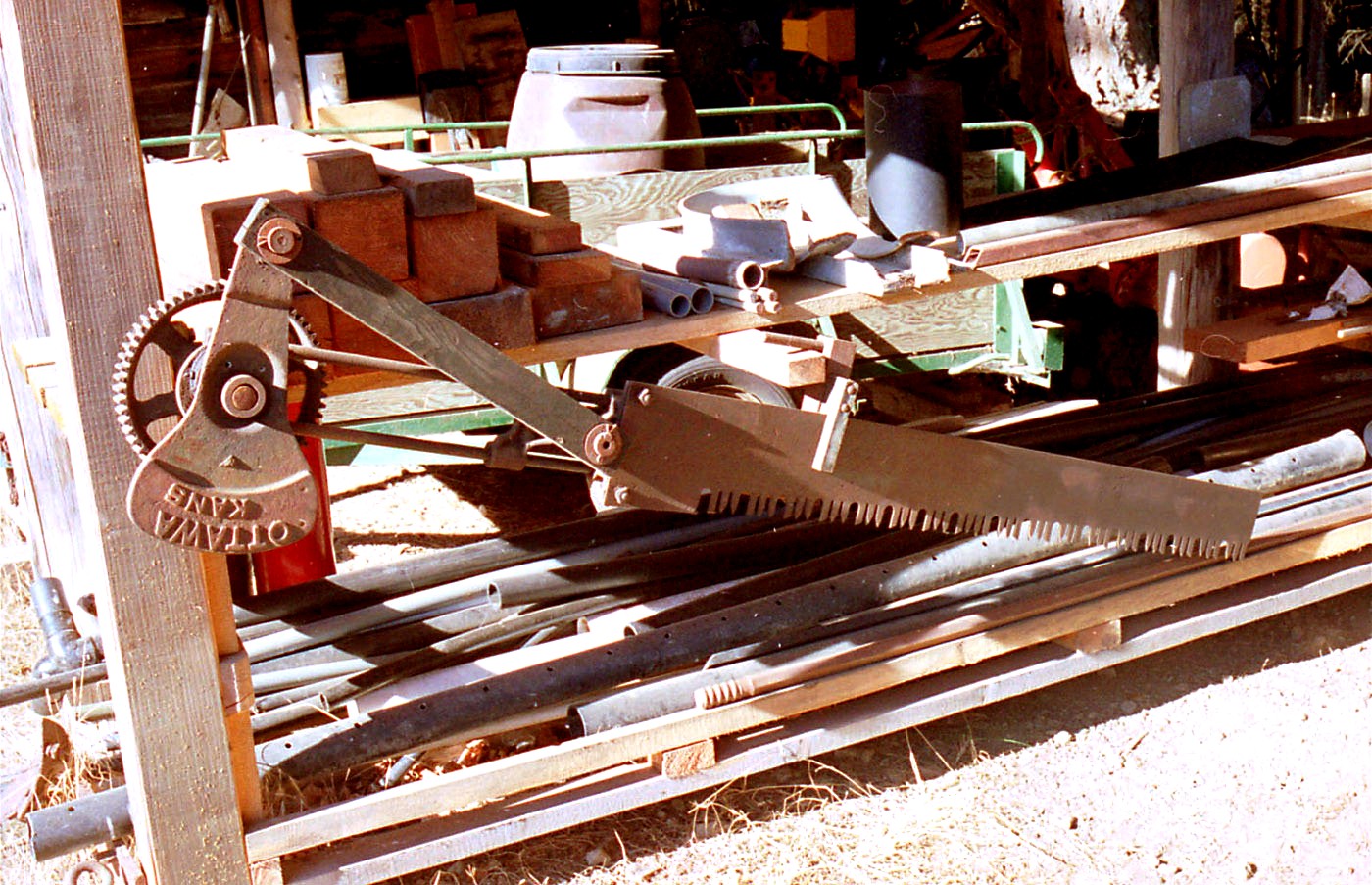 This Ottawa drag saw, manufactured in Ottawa, Kansas, and operated by Roger Painter, was used to cut wood for the colonists’ stoves. It was the cause of an explosive outburst of rage on Brother XII’s part when he wrongly accused Painter of purchasing it without his permission. This was one incident among many that caused the colonists to question his sanity. 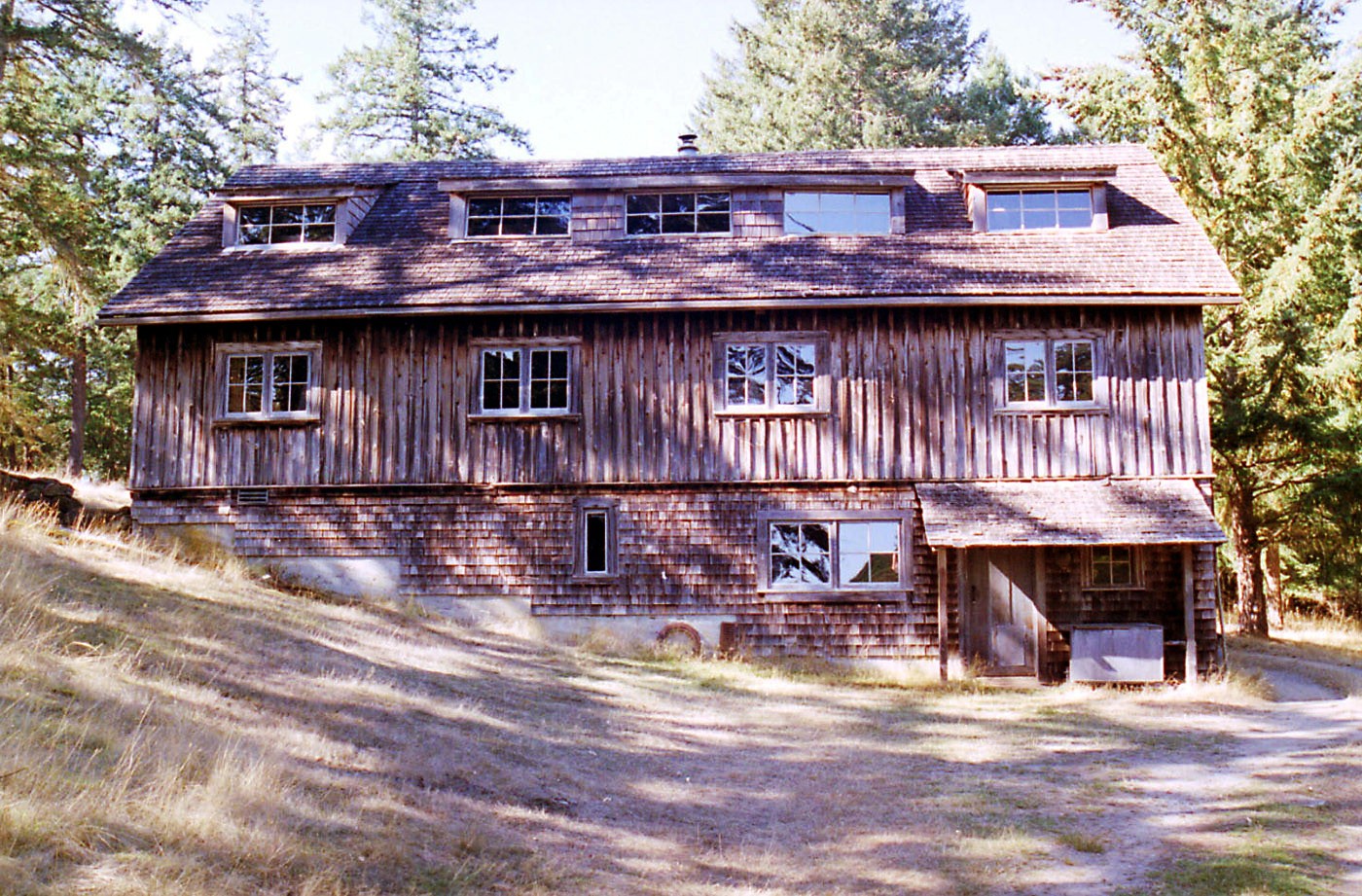 The colony schoolhouse as it looks today. This building served a variety of functions over time, including that of a dormitory for female members. One former colonist, who escaped out a window one night, claims that communal sexual activities took place here and that the disciples were practicing a kundalini type of sex by which they hoped to achieve eternal life. 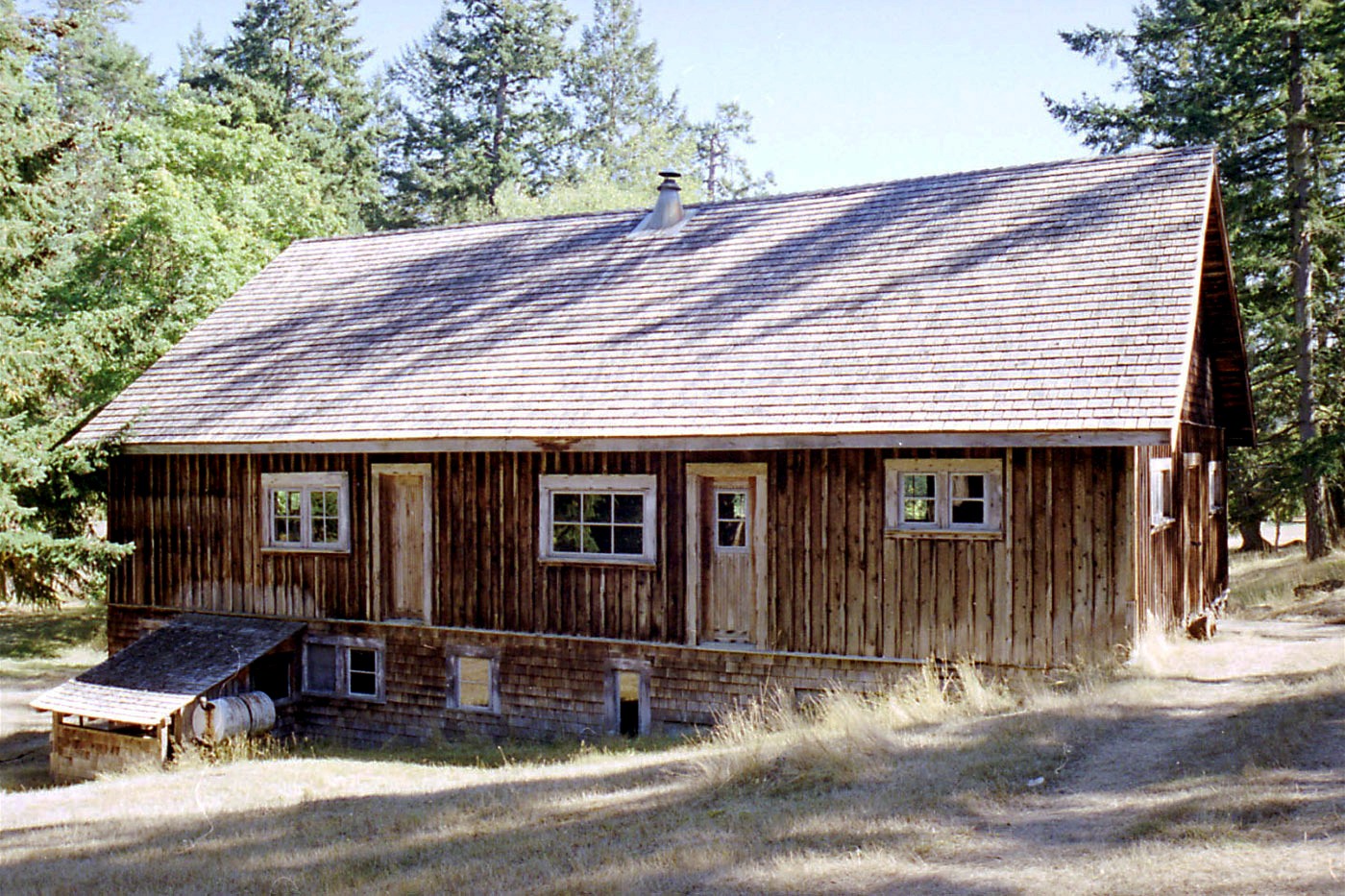 Another view of the same building. On the ground floor is a subterranean vault in which Brother XII may have concealed up to a quarter of a million dollars in cash and gold, a hoard which continues to lure treasure-seekers to this day. Brother XII’s preferred method of storage was to fill mason jars with gold coins, sealing the contents with melted wax. 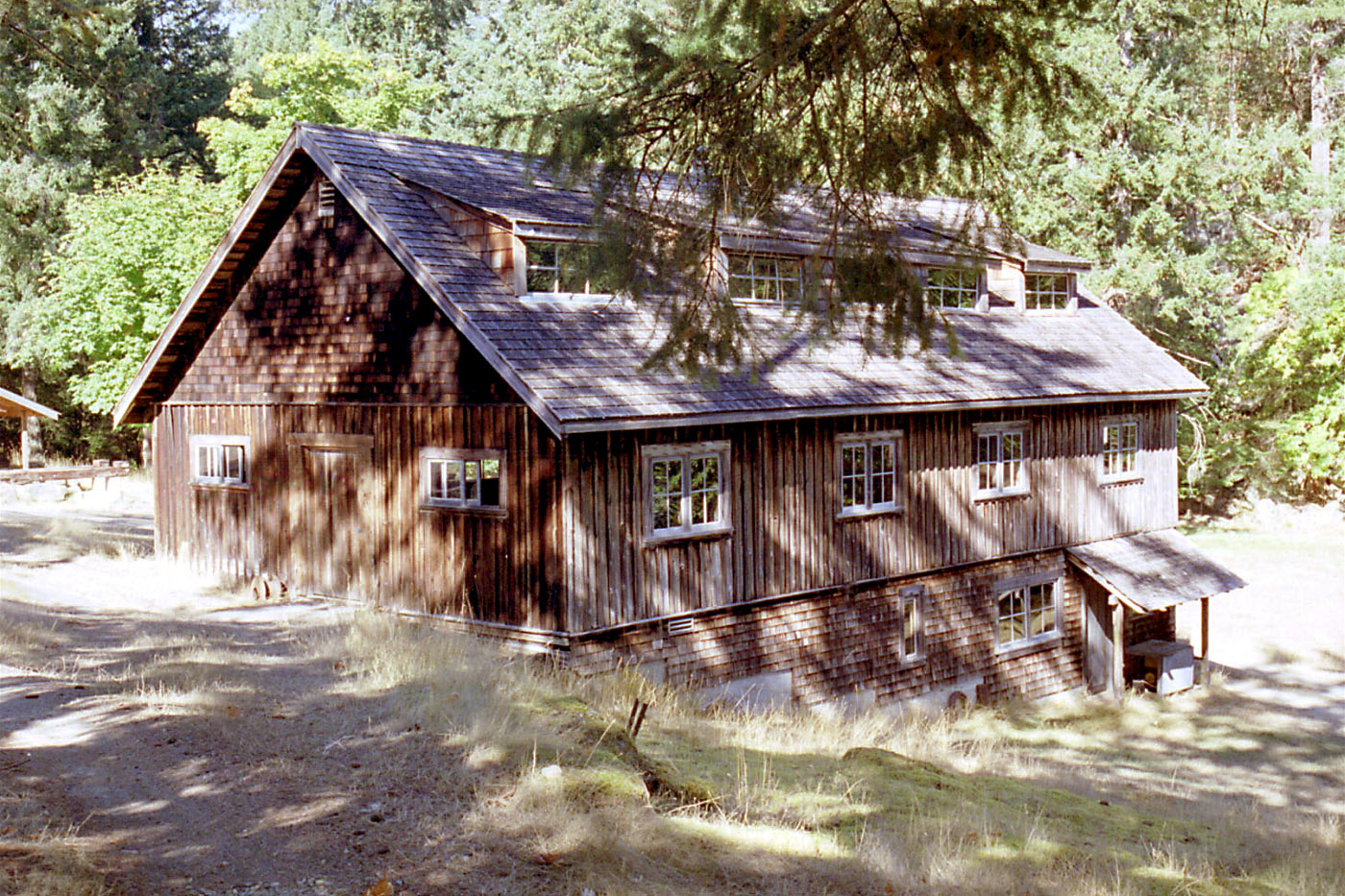 The dormitory photographed from the hill above it. The building is now used to store farm equipment and implements. DeCourcy Island is privately owned, though there are a number of residences on the Island. The farm itself remains intact, in part out of respect by the owner for the historical significance of the property. 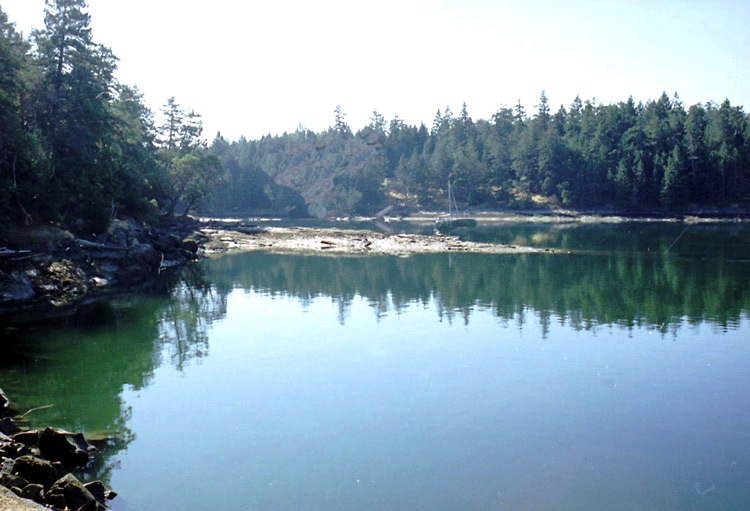 The lagoon at the south end of DeCourcy Island. Brother XII and his selected disciples built houses along the shoreline of this tranquil cove and Brother XII moored his sixty-two-foot sailboat, the Lady Royal, here. The lagoon is now a provincial marine park and a favorite anchorage for boaters exploring the Southern Gulf Islands. 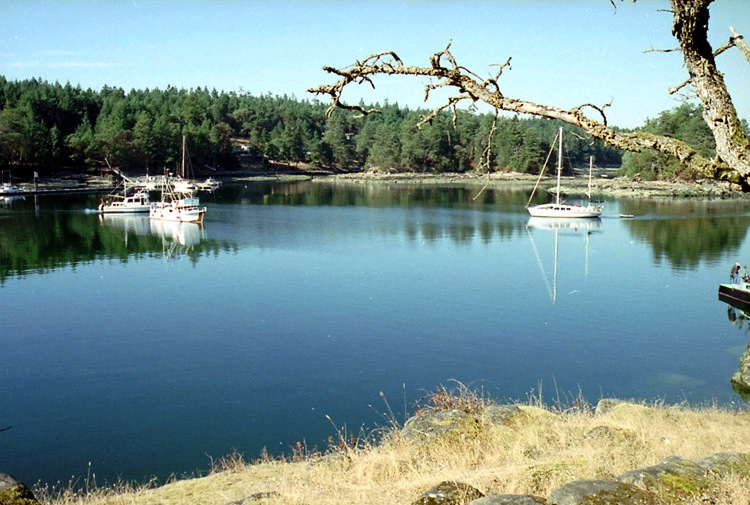 Another scene of the lagoon from the site of Brother XII’s house. Increasingly paranoid, he had a fort constructed just below it that was entered through a trapdoor in the roof. It had a viewing port through which vessels entering the lagoon could be fired upon. The perimeter of the area was patrolled by sentries. 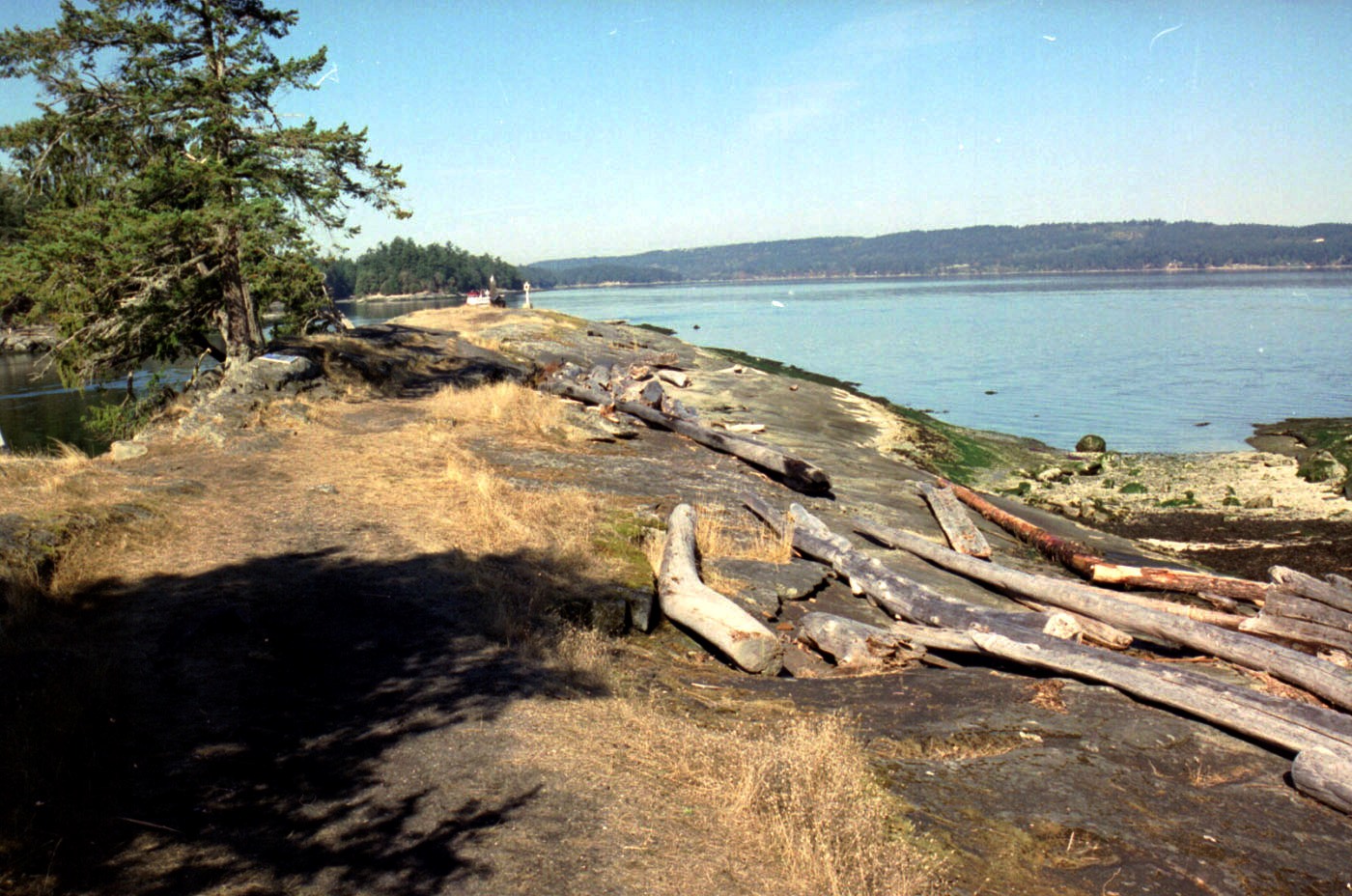 Another view of the area on DeCourcy Island that Brother XII called “The Point” looking towards the white navigation marker for vessels entering the lagoon. Brother XII sunk two large boulders in the narrow passageway intended to tear out the bottom of any vessel entering the lagoon, his novel way of discouraging visitors. 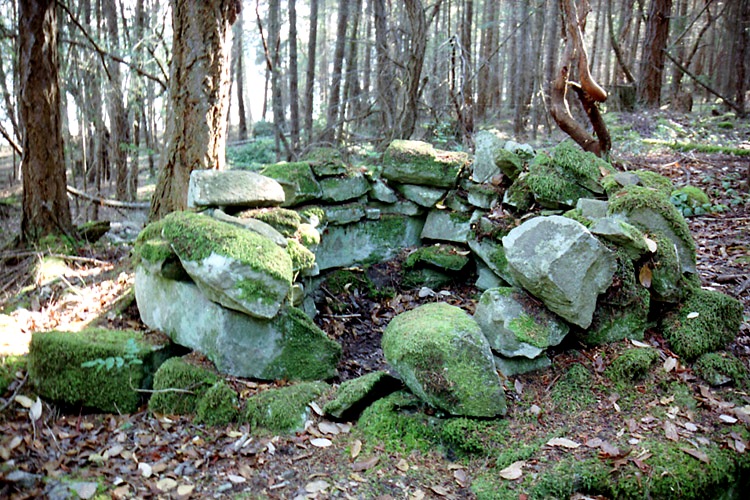 This stone fort on DeCourcy Island was one of several manned by colonists armed with rifles. The forts, constructed from rocks, logs and earth, were cleverly camouflaged, with lines of sight down to the water. This is the only fort which remains intact today. It is typical of cults to arm themselves against perceived threats from the outside world. 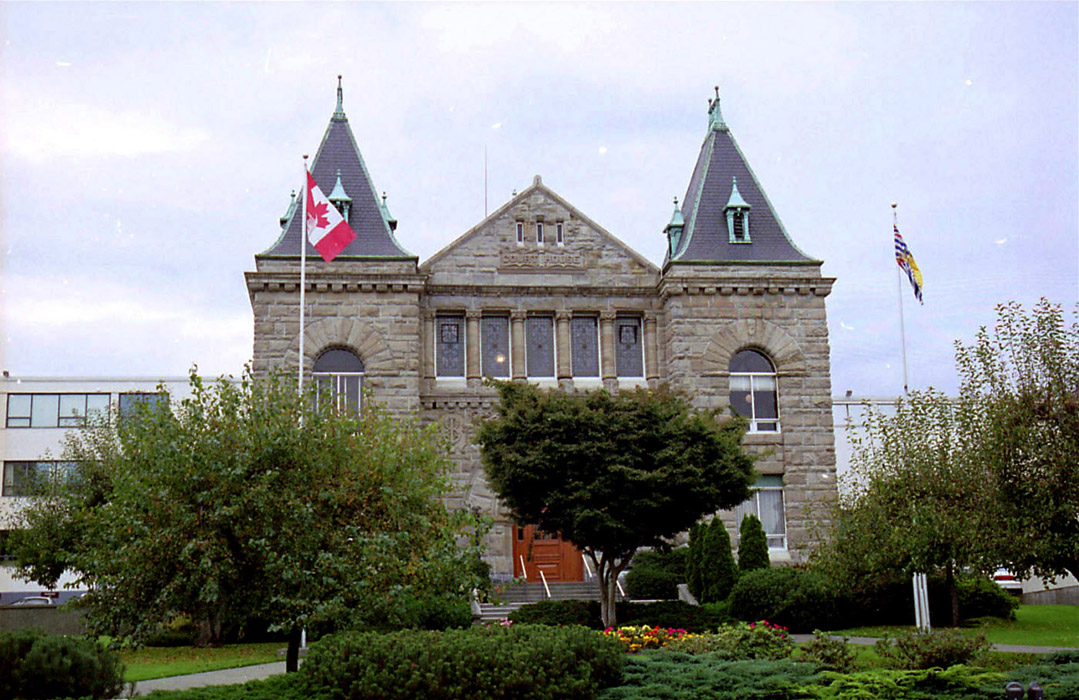 The Nanaimo courthouse in which civil suits against Brother XII were heard in April of 1933. The bizarre testimony recounted during the court cases, including a description of “etheric assassination,” caused the Chief Magistrate to declare these to be “the strangest cases ever to come before a Canadian court of law.”